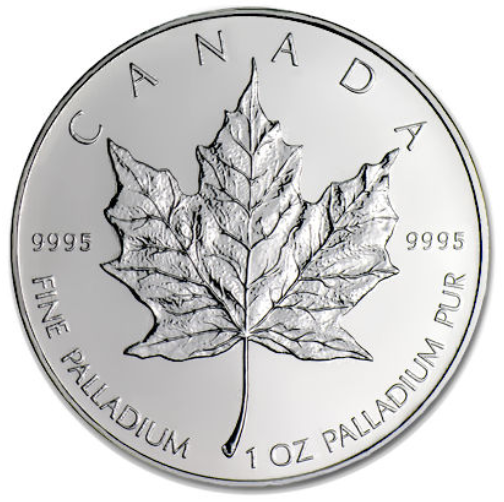 Palladium is a rare and lustrous silvery-white metal discovered in 1803 by the English chemist William Hyde Wollaston.  He named it after the asteroid Pallas, which was itself named after the epithet of the Greek goddess Athena, acquired by her when she slew Pallas.

More than half the supply of palladium and its congener platinum is used in catalytic converters  which convert as much as 90% of the harmful gases in automobile exhaust (hydrocarbons, carbon monoxide, and nitrogen dioxide) into less noxious substances. Palladium is also used in electronics, dentristy, medicine, jewelry, and other applications.  Palladium is a key component of fuel cells, which react hydrogen with oxygen to produce electricity, heat, and water.

Ore deposits of palladium are rare. The most extensive deposits have been found in South Africa, the Stillwater Complex in Montana, United States, Ontario, Canada, and the Norilsk Complex in Russia.

The first palladium coin was issued by Sierra Leone in 1966, with Tonga issuing coins in 1967. Since the 1960s, nations including Canada, the Soviet Union, France, Portugal, China, Australia, and Slovakia have issued palladium coins, but most were special commemoratives rather than palladium bullion coins.

The two most-popular palladium bullion coins available are made by the Royal Canadian and United States Mints.