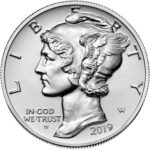 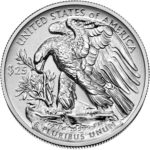 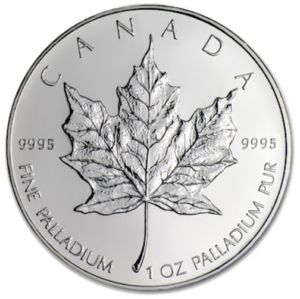 Palladium coins are the latest addition to the United States Mint’s popular American Eagle collection of precious metal coins.  The lustrous silvery-white metal is actually more rare than gold and platinum. The Mint introduced its new series of numismatic (collector) palladium coins in 2018 with the American Eagle One Ounce Palladium Proof Coin. And in 2019, the American Eagle One Ounce Palladium Reverse Proof Coin is available.  Reverse proof coins feature frosted backgrounds, while their design elements are polished to a mirror-like finish, creating a magnificent contrast.  Whether you are new to collecting or already a seasoned numismatist, American Eagle Palladium Coins, with different finishes each year, make unique additions to your collection.

The obverse (heads) of this design features a high-relief likeness of “Winged Liberty” from the “Mercury Dime” obverse designed by world renowned designer Adolph A. Weinman. In keeping with the original coin, inscriptions are “LIBERTY,” “IN GOD WE TRUST,” “2019,” and Weinman’s distinct initials.

The reverse (tails) design features a high-relief version of the 1907 American Institute of Architects Gold Medal reverse, also by Weinman, which includes an eagle and a branch. Inscriptions are “UNITED STATES of AMERICA,” “$25,” “1 OZ. Pd (the chemical symbol for palladium), .9995 FINE,” and “E PLURIBUS UNUM.”

Each coin is encapsulated and packaged in a gray leatherette presentation case with satin lining. It is accompanied by a Certificate of Authenticity.