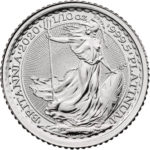 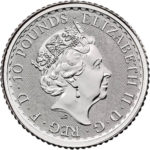 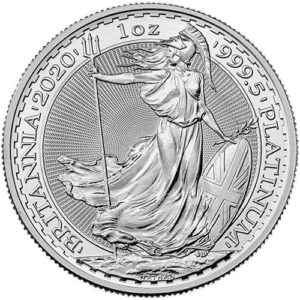 The British Platinum Britannia coin was introduced by the Royal Mint of England in 2018 and is currently produced in a 1 oz and 1/10 oz size.

On the obverse of 2020 1/10 oz British Platinum Britannia Coins is the depiction of Queen Elizabeth II. This right-profile effigy of Queen Elizabeth II was created in July 2015 by Jody Clark and is the fifth-generation effigy on British coins. This design captures the Queen at the age of 89 wearing the Royal Diadem crown on her head.

The reverse of 2020 British Platinum Britannia Coins includes the Philip Nathan vision of Britannia. Britannia is depicted with a Corinthian helmet on her head.   She holds a trident in her right hand and her left hand rests on the top of a shield emblazoned with the Union Jack.