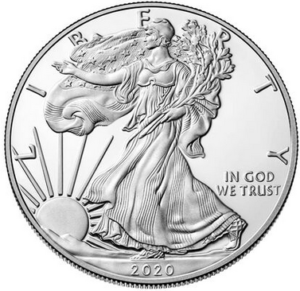 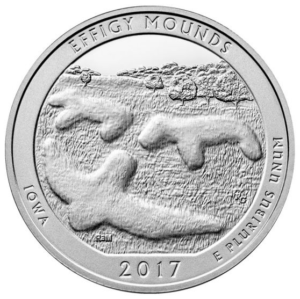 The reverse  design depicts an immigrant family approaching Ellis Island with a mixture of hope and uncertainty. The hospital building can be seen in the background. Inscriptions are “ELLIS ISLAND,” “NEW JERSEY,” “2017,”and “E PLURIBUS UNUM.”

From 1892 to 1954, Ellis Island was the largest and most active immigration station in the United States, where approximately 12 million immigrants were processed. On average, the inspection process took approximately three to seven hours. For the vast majority of immigrants, Ellis Island truly was an “Island of Hope”— the first stop on their way to new opportunities and experiences in the United States.

Ellis Island was added to the Statue of Liberty National Monument in 1965 by Presidential proclamation and is administered by the National Park Service. The main building re–opened in September 1990 as the Ellis Island Immigration Museum, at that time the largest restoration project in U.S. history.

Most of the remaining unrestored buildings on Ellis Island were among the first and largest public health hospitals in the United States. The facility was considered to be the most modern of its day. The 725–bed Ellis Island Hospital Complex, completed in 1909, consisted of a powerhouse, morgue, laboratory, and housing for doctors and nurses. Covered corridors connected the main hospital building to infectious disease wards, kitchens, laundries, and recreation facilities for patients and staff.

All 2017 5 oz ATB Ellis Island National Monument Statue of Liberty Coins in this listing are in BU condition. Coins in BU condition show no signs of wear and tear, however you may notice minor flaws ranging from breaks in the luster and spotted surfaces to contact marks from striking blanks during the production process.