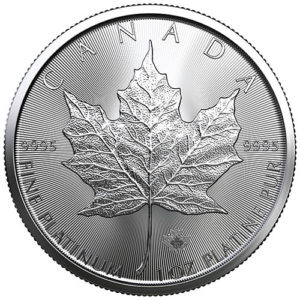 Design:
The reverse design for this coin reproduces Master Engraver Walter Ott’s maple leaf from the Mint’s original 1979 bullion coin. This design remains in use on all Royal Canadian Mint bullion coins to this day.  The obverse includes the effigy of Her Majesty Queen Elizabeth II by Susanna Blunt.